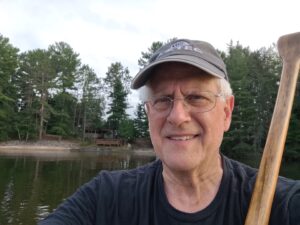 You founded PPA as a very small business and ran it for 25 years. Has PPA become the company you expected it to be?

It exceeded my expectations within the first 9 to 10 years. My vision for the company was rather limited. We were able to recruit some really skilled and creative people who came in and helped to redefine PPA’s scope and expand the range of issues and research methods we could employ. In the beginning, I ran PPA mostly as a general contractor and subcontracted with a variety of individuals and organizations who carried out much of the work. Over time, we brought in people who could do the work from inside PPA. That made PPA more effective, competitive, and profitable.

How has your role changed as board chair?

Most of what I do is focused on company strategy and leadership. I play very little role in day-to-day operations.

This year, I’ve been involved in two projects. I’m happy to get involved in a project now and then, but PPA has a very capable staff, and they are very well equipped to carry out the work with our clients.

You’ve gotten to know CEO Rob Fowler pretty well over the years when he led the Small Business Association of Michigan and turned to PPA for research. What was he like as a client?

Rob always posed penetrating questions both in terms of what he wanted to learn and on how we proposed carrying out the work. He was able to dig into complex data and find the crux of the matter. He would often times have terrific insights about what the data were trying to tell us. He would bring us in when he knew in broad terms what he wanted to learn, but he was very open to ideas about how to refine the questions or broaden them. He thought like a researcher. That meant that in addition to being our client, he was a research partner.

What makes Rob the right person to lead PPA?

Rob has terrific values. He genuinely cares about the people and communities and institutions we serve. He’s strongly committed to diversity, equity, and inclusion, and his personal values align very well with PPA’s organizational values. I see him as a terrific teacher almost in the Socratic tradition. He can help you learn all kinds of things just by asking the right questions. You walk away from a conversation with him saying, “Wow, I never thought about it that way.”