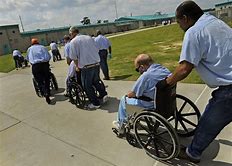 Many of the older prisoners received long prison sentences during the “get tough on crime” wave of law enforcement and sentencing policy changes that began in the 1980s. Research has since shown that approach to be largely ineffective, and many states have changed sentencing policies. Nonetheless, the effects persist. Many prisoners who were incarcerated at young ages are now growing old behind bars.

As they age, their health care needs rise, as do related costs to taxpayers. At the same time, research shows, they present a lower risk of committing crimes if they return to the community.

PPA has released a new issue brief on the rising ages of prisoners, the impact that it can have on society, and suggested practices and policies. Read the issue brief here: Aged Out of Crime and Still Doing Time.

For more information about PPA’s work in corrections and criminal justice, contact Robb Burroughs at 517-485-4477 or rburroughs@publicpolicy.com.